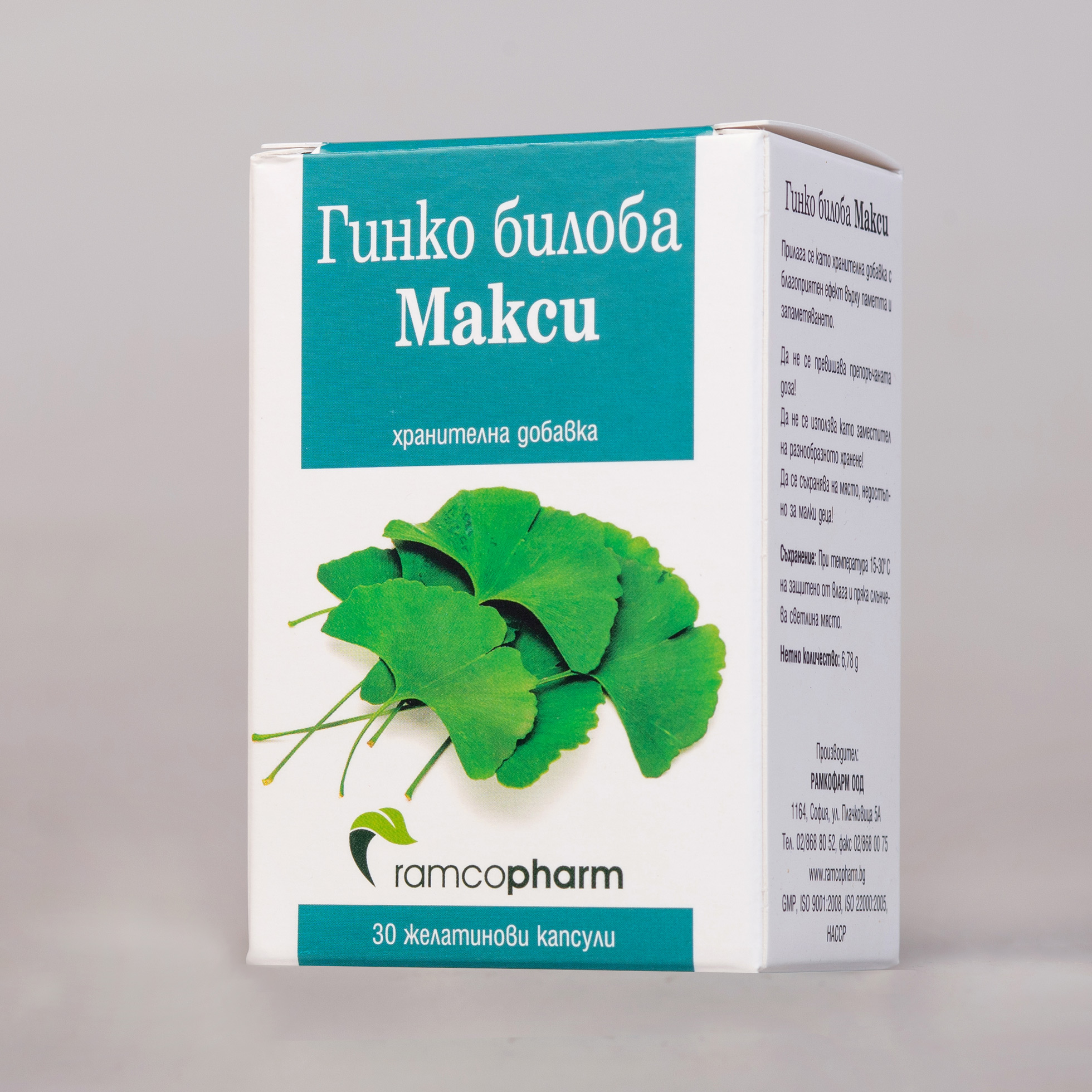 There are no reviews yet.

Be the first to review “GINKGO BILOBA MAXI” Cancel reply
Categories: Brain, Immunity
Composition of one capsule:   From ancient times the leaves of Ginkgo biloba have been used in Traditional Chinese medicine. Nowadays, it is one of the best studied, researched and widely prescribed herbs. The main chemicals in the leaves of the tree are ginkgo flavonoid glycosides and terpene lactones. Ginkgo flavonoids directly dilate the smallest blood vessels, increase the speed of the bypass blood flow and the level of oxygen in the brain, as well as in the other organs of the body. This has a positive effect on all ailments that are due to insufficient blood supply - memory loss, senile dementia, tinnitus, dizziness, headache. Ginkgo biloba is an antioxidant - it prevents the formation of atherosclerosis plaques on the inner walls of blood vessels. GINGKO BILOBA MAXI (120 mg) is suitable for elderly people with advanced dementia and atherosclerosis. The effect occurs after taking the capsules for 4-6 weeks.

One capsule twice a day during meals (240 mg daily dose).

Hard gelatin capsules, packed in 3 blister packs of 10 capsules each, placed in a cardboard box.

RAMCOPHARM LTD was founded in 1993 and it is 100% private Bulgarian business company. Its principal activity covers development, production and distribution of food additives containing basically herbal substances – products combining standardized dry extracts, ethereal oils and vitamins in a capsule or a tablet.

Copyright 2021 Ramcopharm ltd| All Rights Reserved | Design by LIP Trade ltd
We use cookies on our website to give you the most relevant experience by remembering your preferences and repeat visits. By clicking “Accept All”, you consent to the use of ALL the cookies. However, you may visit "Cookie Settings" to provide a controlled consent.
Cookie SettingsAccept All
Manage consent

This website uses cookies to improve your experience while you navigate through the website. Out of these, the cookies that are categorized as necessary are stored on your browser as they are essential for the working of basic functionalities of the website. We also use third-party cookies that help us analyze and understand how you use this website. These cookies will be stored in your browser only with your consent. You also have the option to opt-out of these cookies. But opting out of some of these cookies may affect your browsing experience.
Necessary Always Enabled
Necessary cookies are absolutely essential for the website to function properly. These cookies ensure basic functionalities and security features of the website, anonymously.
Functional
Functional cookies help to perform certain functionalities like sharing the content of the website on social media platforms, collect feedbacks, and other third-party features.
Performance
Performance cookies are used to understand and analyze the key performance indexes of the website which helps in delivering a better user experience for the visitors.
Analytics
Analytical cookies are used to understand how visitors interact with the website. These cookies help provide information on metrics the number of visitors, bounce rate, traffic source, etc.
Advertisement
Advertisement cookies are used to provide visitors with relevant ads and marketing campaigns. These cookies track visitors across websites and collect information to provide customized ads.
Others
Other uncategorized cookies are those that are being analyzed and have not been classified into a category as yet.
SAVE & ACCEPT